Unfortunately, for the very first time, one of the Ewes developed Acute Mastitis and as it is every sheep owners nightmare, I thought that I would write a short account about the problem and maybe it may be of some help to others.

Robbie is the lamb that is a bit on the special side as his mum developed Acute Mastitis within 24 hours of his birth. It had been a difficult birth, what they call a  'Hung birth' but all seemed fine after the initial drama and delivery and she gave birth to twins. Despite me checking the Ewe every 3 hours, and that included checking her udder between the early morning check and the following inspection, her udder had turned almost black on the right side and very red on the left side.The vet visited and gave antibiotic and painkiller injections and I was to repeat the doses 48 hours later. The clock was now ticking to try and save her life and then to save the udder. So, for the next 2 days, every 2 hours I stripped (milked) the teats of the infection, and in case you were wondering, I didn't get any sleep! Both lambs were bottle fed but sadly one of the lambs died the day after the vet had visited,  he had warned me that this may happen because the lamb could have fed from the 'bad' side of the udder. After the 5th day, the lamb (Robbie) was able to feed from the left teat but I still continued to give him  'top up' bottles. Over the course of the following 3 weeks, I continued to 'strip' the right side of the udder, gradually increasing the length of time between strips until we reached 6 hourly. By this time, Robbie had started feeding from both teats as the milk was clear on this side also. To help her fight the infection, I had given the Ewe a drench of Apple Cider vinegar once daily for the first 5 days and then added it to her drinking water. I had also given her handfuls of freshly picked dandelions every day for the full 4 weeks hoping that this may also help her to get rid of  the infection. Eventually after 4 weeks, Robbie was feeding well and gaining weight and he didn't need top up bottles. The Ewe was feeding well and her udder - both sides looked pink and healthy. It had been a difficult and exhausting 4 weeks and I couldn't have been happier the day I released her and Robbie from the field shelter, back with the flock.

A very special day and one  that I will always remember. 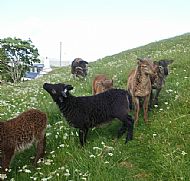